Early december, only the best of the best gathered in Abidjan, capital of Ivory Coast, for the Super Grand Prix (G8) in Abdijan.

Reigning European Champion Jaouad Achab reached the semi-finals in weightclass -68. In a tensed battle for a spot in the final Russian powerhouse Alexi Denisenko was the better fighter. Achab lost the fight for bronze against Huang from Taipei.

Other Belgian fighters Raheleh Asemani (class -57) and Salaheddine Bensalah (class -58) made it to the quarterfinals. 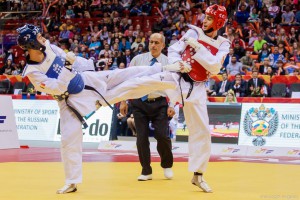